After a brief visit to Pittsburgh to see some friends—

here with Nancy, Rannigan, and Amy at Dobra tea

—and to launch Sorrow at the wonderful East End Book Exchange 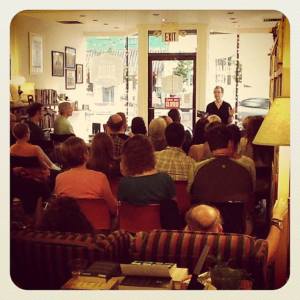 —and a long day on the train back to New York, then a quick overnight with Heather and Nick and the splendid Cordelia (recently practicing the mokugyo at Brooklyn Zen Center)

—I am now heading back to Wellspring House, a peaceful writing retreat in Ashfield, Massachusetts.

On the way to Penn Station a few hours ago, on the D train, I found myself noticing that of the people in my immediate vicinity (I counted twelve), seven were engaged with or plugged in to their electronic devices, the others engaged with old-fashioned devices—a book, a subway map, El Diario, a nail file & hand cream, and sleep—only one other person, like me, awake with nothing in hand.

This observation presented itself as a facebook post, although I could not at that moment connect to facebook, and then I thought that posting this observation on faceback (and also posting it here a few hours after the fact) would make me part of the surveillance apparatus of our time.

These thoughts may be in the foreground because I have been reading two very interesting and very different books on the subject of surveillance, Cypherpunks: Freedom and the Future of the Internet, by Julian Assange, with Jacob Appelbaum, Andy Muller-Maguhn, and Jeremie Zimmerman, and a recent book of literary scholarship that looks at Western cultural history on issues of privacy and observation, self and panopticon, The Watchman in Pieces: Surveillance, Literature, and Liberal Personhood, by David Rosen and Aaron Santesso.

Side by side, and in the context of the Edward Snowden revelations, these make fascinating reading. (I first read Cypherpunks last fall when it came out, and sad to say it reads much less abstractly now, these ten months later.)

One aspect of being surveilled is going out in public and presenting oneself—so that I found after the launch event some photos of myself reading  (thankfully distant and fuzzy but evenso looking, to my eye, rather dowdy and grim) appearing on facebook. (What? I look like that?)

Well, I do, apparently, the camera says so. Or maybe I think I still look like this? 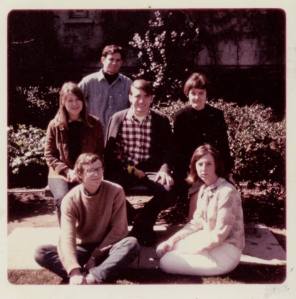 But no, just something in between—time to return to those Dobra photos…

Great thanks to everyone for all the generous support for the coming of Sorrow!